How To Get An UNFAIR INSIDERS CHEAT CODE That WILL INCREASE Your Sales by 50%-200% And Place You Among The Top 1% Of Business Owners.

Let me start this letter by telling you a true life story.

On a beautiful afternoon, many years ago, a young man named Ronald made a crazy decision, one that would change his life forever. Before I give you more details about this decision, let me give you a back story.

Ronald ran a computer center in a university in Umuahia where he did typing, project research, design, etc. with his friend. He wasn't a millionaire but he was making a few thousands of naira, just enough to feed him and keep him going. Everything seemed to be moving fine until one afternoon...

Ronald thought to himself, “this is a trap. If I continue staying in this place I’ll settle here, get married and won’t be able to move on and achieve great things.

So he set to leave Umuahia the next morning.

He called his friend and told him “all the equipment and the entire business is now yours. I’m leaving town tomorrow and I’m not coming back”. He also told his friend his reason for leaving and wished him the best.

In 2017, Ronald, who had now established 2 businesses in Lagos which were doing over 35 billion naira in sales, returned to Umuahia to attend a friend’s wedding.

Since he was close to the university where he had that business, he decided to call his friend who was now married with kids. His friend quickly rushed out and took him round the university again.

While they were going round, he said to him “Ronald, do you know that what you predicted happened as you said it? Everybody who was doing our kind of business here back then weren’t able to leave. They are still here till today and now they are married with children. The only difference is that they added small provision shops to their corner ”

What made the difference between

Ronald and his colleagues?

Have you ever wondered, as I have, what makes this kind of difference in people’s lives?

No it’s not a native intelligence, or talent, or dedication. It’s not that one person wants success and the other doesn’t.

The difference lies in what each person knows, and how he or she makes use of that knowledge.

Things weren’t easy for Ronald at first when he left Umuahia. In fact, he slept in an uncompleted building in Festac and he was drinking garri from a paint bucket.

Life was very hard but he wouldn’t give up.

Everything changed a few months later

Few months later, he attended a business seminar where he met a man who later became his mentor and coach. Ronald began to not just learn from this man, but he implemented everything he learnt.

In a few years he had grown from that young man who was sleeping in an uncompleted building to a big business owner who does over 35 billion naira in sales annually.

This is the story of my mentor, Ronald Nzimora.

Nobody is born a business superstar

There are two ways to succeed in the business world.

The first way is to start from scratch, struggle, fail, get into debt, come out of debt, get depressed, low sales, little or no customers, frustration here and there until you finally figure the business out and master the process many years later.

The second way...the easier way, is to find someone who has accomplished similar results, learn from the person and avoid all the struggles, mistakes, depression, and losses.

Some stubborn people who like to lose money will choose to do it by themselves.

So when I started my business journey, I decided to follow who know road oooo.

I started by watching YouTube videos, started implementing, but I knew something was missing.

Free never gets the job done.

As much as the people who teach free stuff want to help you, there’s a limit to which they can go.

So I started buying books, paying for trainings, and finally connected with my mentor Ronald Nzimora.

Here's a picture of myself and my mentor Ronald Nzimora (Founder, Digital Nexus Interactive and Buywell Properties)

After learning and implementing what I learnt from hundreds of books, articles and personal coaching from my mentor, I’ve gone ahead to build two businesses that do 6-7 figures monthly.

I have authored 5 books, been featured on TV, and have gone ahead to train a lot of people on sales and marketing.

You see, I was once a struggling business owner until I decided to take sales and marketing seriously, learnt the ropes, paid for trainings and I’m here today.

Here's a picture of me at Rave TV, Lagos 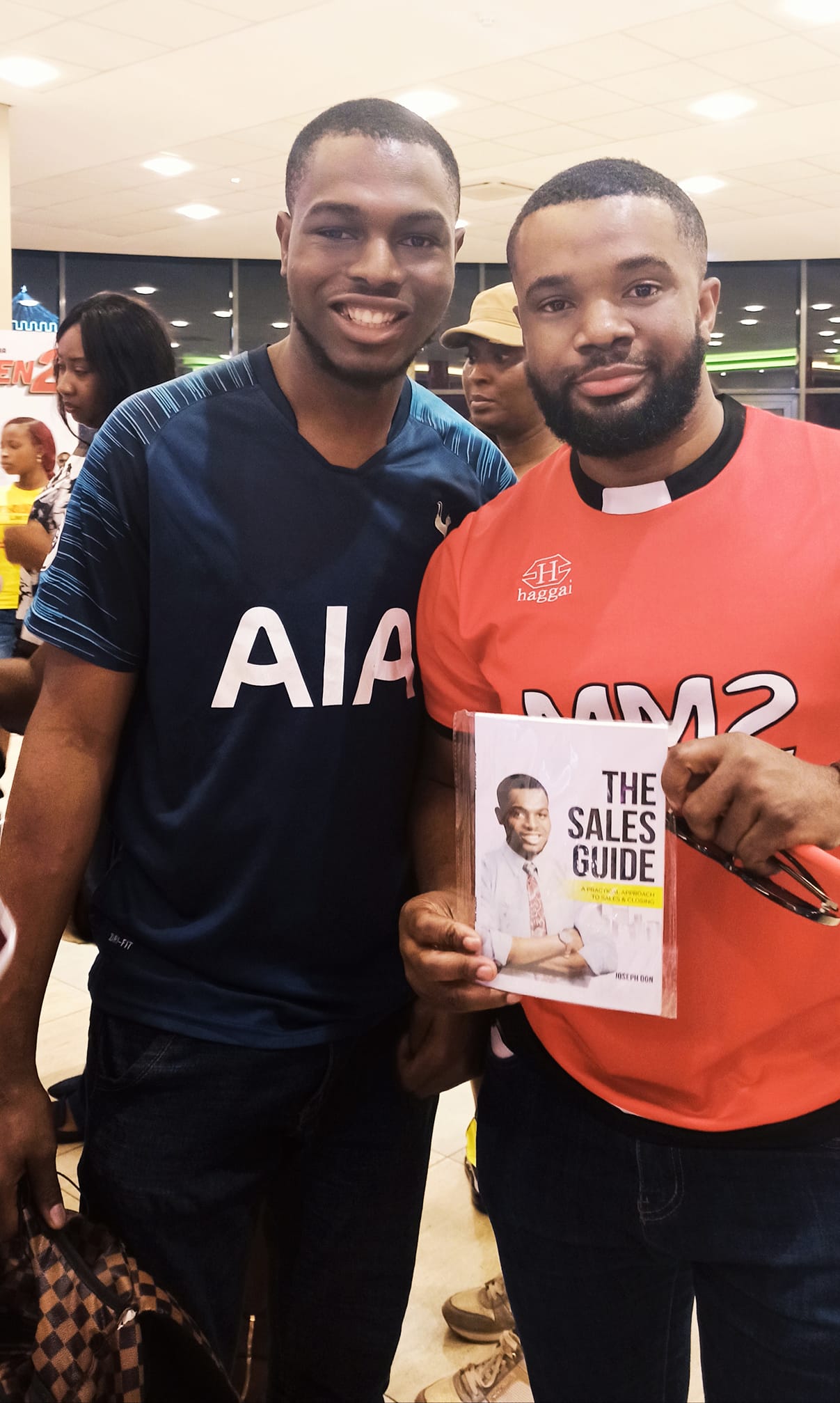 Here's a picture of myself and Williams Uchemba. Yes! he's holding one of my books!

My goal this year is to help 1000 business owners and entrepreneurs increase their sales, make more money and live a comfortable life.

I want to teach you the insider secrets I have learnt from my mentor over the years.

The secrets that helped him build a business from zero to N35 billion in revenue yearly.

These same secrets has helped me scale my business from nothing to one that does 7 figures consistently every month.

I know that there are a lot of people who are hungry for success and ready to take action but they can’t afford $1,000 at the moment to pay for my one-on-one coaching.

So I have decided to do something special for you.

I have learnt and implemented various sales and marketing strategies that have brought in millions for me and my students.

So, I have decided to create a special email coaching list where over the next 100 days, I will be sharing the various sales and marketing lessons I have learnt in over 5 years with you.

The money making ideas, knowledge and strategies that you will be learning from these special coaching emails will definitely help to transform your sales and income regardless of your type of business.

So basically, you will get 1 email daily, where I will either share a sales, marketing or business strategy that you can readily apply.

These are my highly valued strategies and I’m making it affordable because I want to help a lot of people. However, if you know that you won’t implement the strategies I share with you, then don’t pay for this coaching.

Here's what people are saying about me